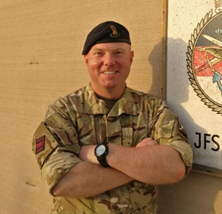 Major Matt Fry commissioned as an officer in the Royal Engineers (RE) in 2005 and was assigned as a Troop Commander in Germany, where he completed OP TELIC 12 (Iraq) as Search Troop Commander. He then had a tour with 15 Field Support Squadron on OP HERRICK 12 (Afghanistan). Professional Engineer Training followed with an attachment to the US, culminating with successful CEng status and receipt of the Rainy Anderson Award. He then worked as Liaison Officer to Defence Intelligence, supporting strategic level tasks world-wide and developing the analytical methodologies for infrastructure assessment. A job the Royal School of Military Engineering at Chatham followed, where he led the infrastructure phase of the courses held there and formalised Infrastructure Assessment training within the RE, as well as pioneering the use of Augmented and Virtual Reality in the classroom with a view to enhancing infra delivery for the RE. Since taking over as commander of 527 Specialist Team Royal Engineers (STRE) Matt has deployed on operations in the Middle East and then transitioned the team to works in the Falkland Islands, bringing to bear the innovation works that began he pioneered at the school in Chatham, with the use of LiDAR, photogrammetry and virtual tours to bring infrastructure problems to life. He has dedicated over 75 hours to STEM ambassador work, won the Army Chartered Civil Engineer of the Year award from the Worshipful Company of Engineers and led 527 to win the team prize for Innovation with the Tallow Chandlers. 527 STRE is now taking a lead on innovation within the RE.